On this page you will find tributes to those who have had a significant impact to the Dog Guide sector in Australia.

The Seeing Eye Dogs/Vision Australia team suffered a great loss with the passing of Leigh Garwood. 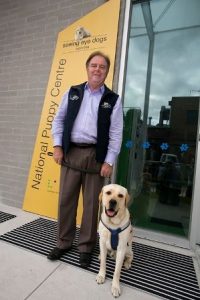 Many would have known Leigh as the former Chief Executive Officer of Seeing Eye Dogs from 2004 to 2008.

Leigh was widely known for his passion for Seeing Eye Dogs and the blindness/low vision community. He was instrumental in the development of the world-class puppy and breeding centre, which opened in 2014. He was loved by all of his colleagues, clients, puppy carers, and volunteers for his approachable and kind nature, his passion, and his commitment to the mission.

Totally blind from the age of eight, Phyllis Gration determined at a very tender age that, although she was naturally shy and reserved, she would not tolerate being patronised or regarded as an object of pity. As she matured, she had to overcome to many difficulties including obstruction from authorities who belittled her desire to achieve the highest levels of education possible. She proved them wrong and rose from achieving dux of her primary school to graduating with distinction as the first blind woman to graduate from Melbourne University.

Her book traces the development of the dog-guide movement in Australia from its humble beginnings in Western Australia to the highly sophisticated dog-guide-training of today.

The road has been rough and there have been many setbacks and sacrifices but as Phyllis herself says:’if we can’t do something for somebody else, i think life’s pretty empty, I don’t think you can get happyness just keeping everything to yourself. I think you have to give in order to bring a certain sense of satisfaction and joy and happiness in living’. 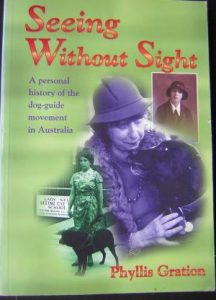 Tom was a long-serving member of VisAbility’s Orientation and Mobility (O&M) Team, a trail blazer for the profession and was well known to many VisAbility clients.

Tom was instrumental in setting up the early O&M services in Australia but his professional reputation extended to the international stage. He was involved in training O&M instructors all over the world, including the delivery of a program in Indonesia with a former VisAbility colleague, and was recognised with a prestigious medal and award.

Tom was born in London on May 5, 1935. He received his basic education in the UK and continued this while serving with the British Army from 1953 to 1956. He was part of the Commonwealth United Nations Forces in South Korea and Japan with a short stint in Malaysia before moving to Perth, Western Australia.

In 1964 Tom qualified as Guide Dog Instructor at the Royal Guide Dogs for the Blind, National Training Centre in Melbourne. He was the first to graduate in the Australian program after five years of study and hands on experience. After passing theory, practical assignments and all requirements of the examining board he qualified as teacher trainer of instructors after a further three years of study.

In 1971 Tom qualified on the first international ‘Binaural Sensory Aid’ course conducted by Canterbury University. One year later he graduated from the Orientation and Mobility course in Melbourne, sponsored by the National Council for the Blind and Australian Council of Rehabilitation Organisations on Disability (ACROD).

Tom was an instructor for the Royal Guide Dogs for the Blind from 1959-77. During this time he taught O&M, trained dogs and instructors and initiated client service with Guide Dogs from their homes, and was promoted to chief instructor in 1967.

In the years following Tom spent time in the United Kingdom, United States, West and South Africa and the Netherlands to observe and study training and instruction.

From 1978 – 1995, Tom worked tirelessly across the Asia Pacific region, developing and conducting O&M programs and establishing self-sustainable training models. During this time he worked in Indonesia, India, Singapore, Malaysia, Thailand, Myanmar, Taiwan, the Philippines and China.

In 1995 Tom returned to Australia and in 1997 began working for VisAbility (then the Association for the Blind of Western Australia) as a Field Officer at the South West Regional Office, Bunbury. He continued to consult, research and write on O&M development, and was a member on the advisory committee to the Bunbury Council on Disabilities, the Bunbury Road Wise Committee and the Access Committee for Senior Citizens. Tom retired in May 2014 after 15 years of dedicated work for the organisation.

Thomas James Blair, Bunbury (WA) was awarded the Medal of the Order of Australia (OAM) in 2004 for service to people with visual impairments, particularly through the development of orientation and mobility training programs in Australia and Asia and the Guide Dog movement.